On the 29th June, 2017 (Thursday), organized by the Extracurricular Activities Dean, the Students of St. Luke’s College (SLC) had held the Bible quiz competition as a celebration of the feast day of Saints Peter and Paul. The competition took place in the First Year Classroom which also serves as the Hall of St. Luke’s College (SLC) at 9: 00 AM. It was an extracurricular activities of SLC.

A total of twenty Bible quiz questions was prepared before the competition. From both the Old and New Testament, all the questions were extracted which are also significant and important information for the Students and for their formation as well.

The competition was in groups, for there are four student groups in total namely; Matthew, Mark, Luke and John. For the competition, there were eight students in a group of consisting four students (two males and two females) from the First Year and four students from the Second Year Students (two males and two females). Each group had to answer five Bible quiz questions. Group leaders picked the questions randomly and got 60 seconds to discuss answer among the group. After 60 seconds discussion, they had to answer the questions. They were allowed to answer only for two times.

The Students of SLC got the knowledge about the Bible in general by answering the prepared questions.

They are expectedly to be familiar with some of the major stories and events of the Old and New Testament.

The Activity positively helped the Joined Students getting to experience of answering the questions in bound time. 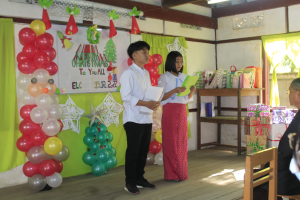